My Trip to Kenya Blog of Matushka Marina Holland Part 04

We awoke today to very thick fog in the mountains.  At breakfast we discussed our schedule for the day, then headed out to the school for the first time: St Barnabas Orthodox Orphanage and School.  A few of the kids are Orthodox, but most come from Protestant or Catholic backgrounds. 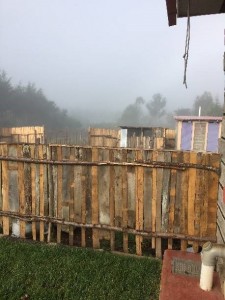 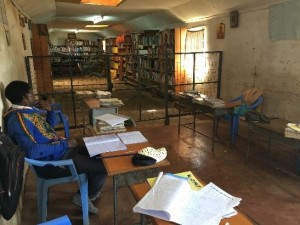 They are currently renting perhaps an acre and a half of land with temporary wood structure buildings around the perimeter, along three sides.  There is a small administrative building with an office and a library which also serves as a chapel 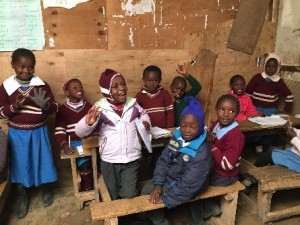 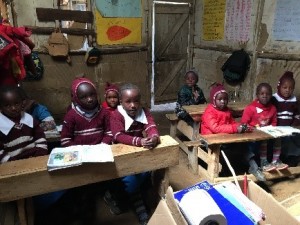 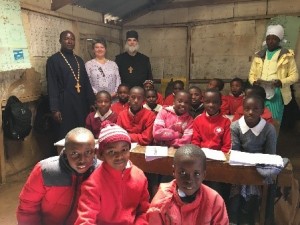 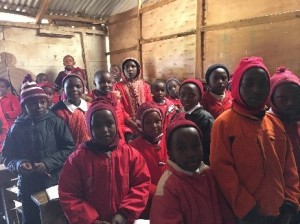 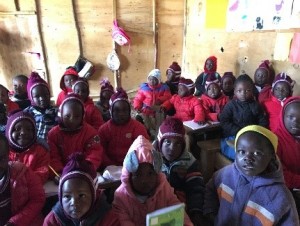 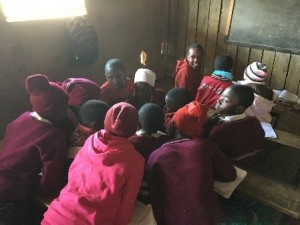 These are pictures of the various classes.  You can see the children are wearing hats and coats.  It feels cold to them, which is hard for me to comprehend because it is in the upper 50s and low 60’s

There are 8 classrooms in an “L” shape.  In the end of the “L” is a dormitory with bunkbeds in which around twenty of the kids sleep, and a little hall with trunks, and shoes lined up outside.  Last is the kitchen where porridge was being cooked over a fire for breakfast.  We were told that FS and I would serve the porridge to the children at the first break

The assistant headmaster brought us on a tour of the classrooms.  In many of the rooms, as we walked in, the students stood and recited a greeting together.  They seemed quiet and shy at first, but not for long! 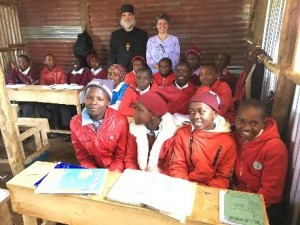 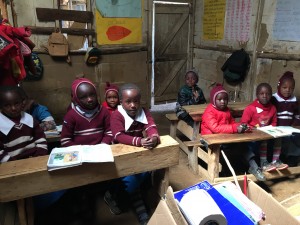 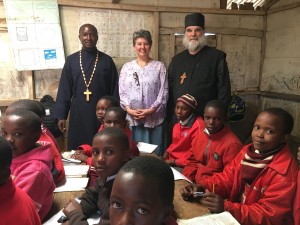 Each classroom has a glass-less window and a chalkboard.  The desks are long, fairly flat boards, perhaps 2×6’s, on wooden legs, with a bench on which several children sit. The teachers do not have desks in the classrooms – they do in the library, though.  There is no electricity in the buildings – no lights or outlets or heating or a/c, except in the office. 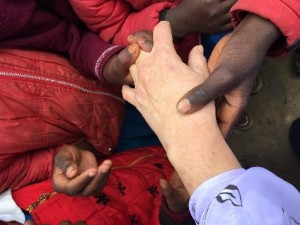 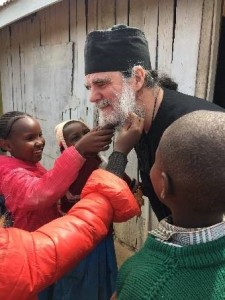 We were brought back to the administrative building, where they had brought in a desk for me to use.  We unloaded the books and classroom supplies and began organizing, until a bell rang and kids began gathering outside the open office door.  It was clear they were eager to see us,  the “wa-zung-gu” (white people).  So we went out and greeted them, and they eagerly shook our hands and high-fived us, and gradually lost their shyness.  They reached up and touched our hair, and felt our wa-zung-gu skin, again and again and again!  They were so curious! 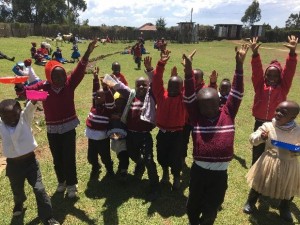 We headed out into the big yard in the middle, where Father Seraphim began roughhousing with the kids (surprise!).  One of the girls gave me a copy of “Oliver Twist” and asked me to read it.  They sat and stood in a large group around me while I read aloud and showed them the pictures.  Then we were summoned – we were supposed to be serving breakfast!  So we hurried over there. 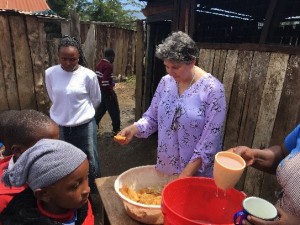 The cook motioned to me to serve up the porridge in the cups, but I was quickly fired from that job; I was filling the cups too much.  The cook took over, and I was allowed to serve a piece of man-dah-zie (a triangular shaped fried sweet bread made of maize and sorghum) to each child!  It appeared that they were organized into lines, different age group in each line.  The younger ones went first.  When we got to the older kids, they were allowed a full cup of porridge!

After their breakfast break the children went back to their classrooms, and Father Seraphim and I returned to the office, where Father Seraphim learned that he would also be teaching!  Then the level 7 teacher and the headteacher came in: they said the time was 1217 and at 1220 my first class would begin, and here are the lesson plans and objectives for this lesson! I quickly realized the plans that I had made were not going to be needed!

We went to the level 7 classroom, with about 20 students.  They stood again as we entered.  The regular teacher, Carolyn, and I agreed she would read the assigned story to the children, and ask them questions for 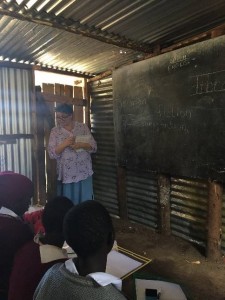 comprehension; then I would do the vocabulary and writing with them.  Carolyn read a short story about two students going to the library to do some research on digital cameras.  When it was my turn, Father Seraphim and I passed out lap dry-erase boards, dry erase markers and erasers.  The lap boards are lined on one side and plain on the other. The children   The children were very excited about them and listened eagerly as I showed them how to use a dry-erase marker in a manner that would allow it to work for a long time.  They were quite excited.  I did vocabulary with them, using assigned words such as “research” and “alphabetical” and “internet”.  I added in some additional words such as “fiction” and “non-fiction”.  I demonstrated how lined paper (or dry-erase boards) are used, and the students wrote the words so carefully and neatly on their boards!  We talked about the different words until Carolyn said class was over.  The students handed in their capped markers and boards and erasers, and said thank you and clapped! Such sweet children!  So attentive and quiet and obedient! 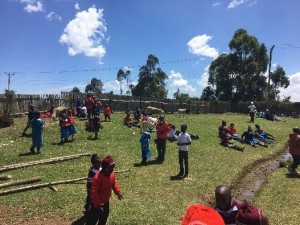 It appears that I will not actually be teaching the children to read English after all.  The younger kids do not speak English well enough for me to communicate with them effectively.  The older kids read quite well.

Then we were summoned again to serve lunch.  This time I was not dishing up enough!  We served them some rice with a bean and vegetable stew.  After lunch the sheep were let out and they ate up the scraps from the breakfast and lunch.  The children had free time  and ran around quite energetically and happily.  Father Methodius JM Kariuki took Father Seraphim and me home to have lunch that his wife had prepared, then we headed back around 3:30.  I went to a classroom and showed some of the teachers and the students the teaching materials that I had brought.  The kids had great fun with the dry erase boards, and the teachers had great fun looking through my suitcase full of laminated posters and flashcards and coloring books. 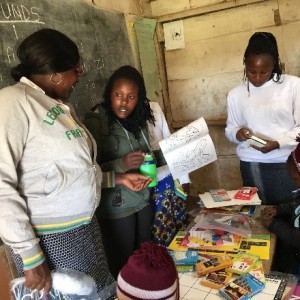 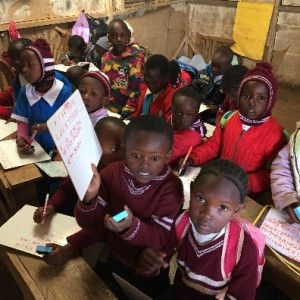 The bus started making its trips to bring the kids home.  Some kids walk home, as Father Methodius JM Kariuki’s kids, and the rest go on one of the three trips the bus makes, in three different directions.  I got to go along on the third trip.  It was amazing!  I was absolutely worn out, but the kids had incredible exuberance and energy, singing at the top of their lungs, bouncing around in their seats, playing with their friends. 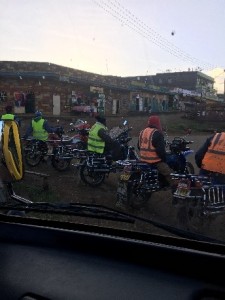 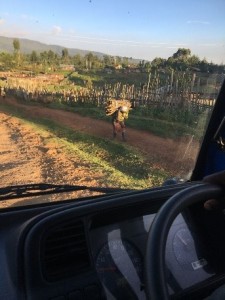 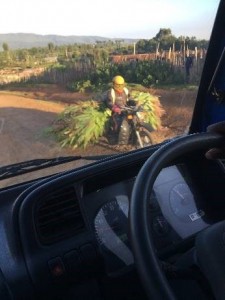 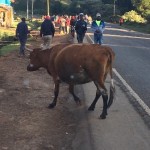 We passed people carrying bundles of sticks on their backs or on their heads.  Daily they go to the forest and chop sticks and carry them home to use in the cook-stove that evening!  There were motorcycle taxis lined up on street corners, waiting for customers.  There were sheep and cows walking along and in the streets on their way home, some of them being led by a kid, some of them not, but knowing the way home.  We got back and climbed out of the bus, and into the van, and Father Methodius JM Kariuki took us home.

And I am EXHAUSTED!  Part of it, I am sure, is little a little jet lag, and the fact that I was awake in the middle of the night for about 3 hours!  But part of also is the love and exuberance of the kids!  Father Seraphim and I are absolutely thronged everywhere we go, with kids still touching our hair and skin, and hugging us, and high fiving us, and shaking our hands, constantly!  I finally locked myself in the office!  Once the kids were off playing outside, waiting for their turn on the bus, I snuck into the library and showed my teaching materials to a few more teachers.  I asked them to let me know, through Father Methodius JM Kariuki, what materials they need more of, and what additional kinds of materials they like.  I know I need more dry erase pens, and the teachers are quite eager about those flashcards and posters, as I mentioned earlier.  So those are for sure on the list.

My only frustration is the lack of wi-fi.  I am keenly aware that my family back home is probably quite anxious about not having heard from us, except during one brief wi-fi window, during which I hurriedly sent brief Whatsapp messages to as many as I could while that wi-fi window was open.  Sorry, all!

Reach Matushka Marina at mmmarinaholland@yahoo.com. She is the wife of Priest Seraphim Holland, and their parish is St Nicholas Orthodox Church, McKinney Texas http://www.orthodox.net