Christ is Risen! Did you know? The Red Egg of Orthodox Easter.

The custom of presenting each other with a red egg at Pascha reflects an interchange between Mary Magdalene and Tiberius Caesar. 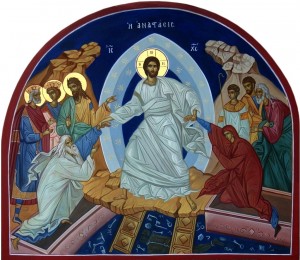 After Jesus’ death and burial, Mary Magdalene was naturally among His kinswomen who came to the tomb early in the morning to complete the process of preparing His body for burial since Joseph of Arimathea and Nikodemos were forced to do so hurriedly on Friday afternoon before the sun set and the Sabbath began.

After the resurrection, Mary Magdalene became a strong witness and traveling preacher of the Gospel, and for this she is referred to as an “equal to the Apostles.”

Mary Magdalene died peacefully and was buried in a cave that is said to be the same place where years later the Seven Sleepers of Ephesus were buried. Her relics were later taken to Constantinople.

The Red Egg
Her travels eventually took Mary Magdalene to Rome, where because of her family’s standing she was able to obtain an audience with the Roman Emperor, Tiberius Caesar. Her purpose was to protest to him that his governor in Judea, Pontius Pilate, and the two high priests, Annas and Caiaphas, had conspired and executed an innocent man, namely our Lord Jesus Christ. 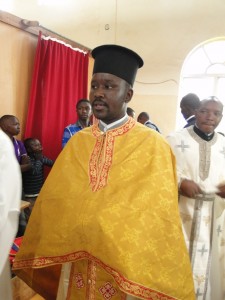 She presented him with a red egg (representing the stone which had been rolled away), saying: “Christ is risen!” She told Caesar of Pilate’s injustice toward Jesus. He responded by moving Pilate to Gaul, where he died under imperial displeasure after a prolonged illness. She then assisted St. John the Theologian in Ephesus. She preached boldly the gospel of the Risen Lord whom she loved.

According to the tradition, everyone visiting the Emperor was supposed to bring him a gift. Rich and influential people, of course, brought expensive gifts whereas the poor offered whatever they could afford. Mary Magdalene took an egg to the Emperor’s palace and handed it to Tiberius Caesar with the greeting: “Christ is risen!”

Tiberius Caesar, naturally, could not believe what he heard and responded to her: “How could anyone ever rise from the dead? It is as impossible as that white egg to turn red.” While Tiberius was speaking these words, the egg in the hand of Mary Magdalene began changing color until it finally became bright red.

Thus the Pascha greeting — in universal Christendom, both East and West — has ever since remained “Christ is risen!” and it became traditional for Christians throughout the world to color eggs in red.

Mary Magdalene then went on to explain to Tiberius Caesar that the now-red egg symbolized life rising from a sealed chamber, a symbol that would have been understandable to a pagan Roman.

Caesar heard the formal complaint presented by Mary Magdalene, and also had received reports of soldiers under Pilate molesting and killing civilians in Judea. For this Pilate was exiled to Vienne in Gaul where he died an unpleasant death. Interestingly, Pilate’s wife Procula Claudia who had a dream about Jesus the night before He was brought before her husband for trial, had become a very pious and devout Christian, and died a saint of the Christian Church.