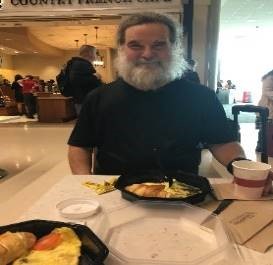 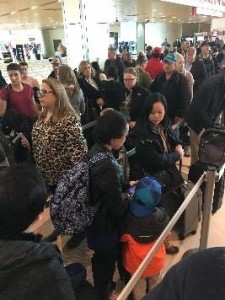 We are already through security at Love Field in Dallas.  Took 22 minutes! TSA workers were smiling and friendly and helpful, in spite of the government shutdown and working without getting a paycheck.  No hiccups at all.  Right now we are sitting at a La Madeleine café, waiting for our breakfast sandwiches.  Figured we’d begin acclimating ourselves to all things French, since we are headed through Atlanta to France!

Around 1115 pm last night, Fr Seraphim (FS) had a dream of sorts, half sleeping, half waking.  In the dream he saw he was in Kenya, standing near a baobab tree, which he is very much hoping to see in real life.  Apparantly this was a desire of his for as far back as he can remember, even before reading about about the baobab

trees in the Little Prince.  Fr Methodius (FM), a guide, and several others and I were with him.  He excitedly approached to tree to touch it, when he suddenly he felt something on his right thigh.  He looked and saw a very long black mamba snake there, just beginning to bite him.  Suddenly, a hand appeared and grabbed the snake and flung it several feet away, where it now lay dead on the ground.  There was a sense that the hand was Daniel’s.  We could see bite marks on FS’ thigh, and a small amount of blood trickling from the marks.  FS jumped up and down, dancing around, very excited, for he realized he had just been spared from a black mamba bite by Daniel.  He was joyfully singing “Christ is risen”, in the Appalachian melody that he loves so much. The others of us were jumping up and down in terror, shouting we must leave quickly and get anti-venom for him, for he had just been bitten by a very venomous snake.  But FS reassured us all, saying, “No, don’t worry, it didn’t all the way bite me!  It did not inject any venom in me!  Daniel protected me!”

Then we looked out toward the horizon where we saw a lion approaching.  The lion sat down on his haunches, and Daniel stood beside him with his left hand on the lion’s shoulder.  The guide grabbed his gun, for he knew this lion; it had a reputation for being extremely ferocious.  FS put his hand out to stop the guide, saying, “No, no, don’t

shoot him.  He won’t hurt anyone, Daniel is there; I’ll make sign of cross and bless the lion. Watch, Daniel will tell him to raise his right paw.” Indeed, Daniel looked to the lion, and the lion raised his right paw.  Then FS saw Charlie and David standing there, right behind the lion, with Daniel.  Charlie and David are young boys who died very tragic deaths near the time that Daniel died.   Daniel looked to FS and said wordlessly, “You prayed for all of us and we are all ok.”

FS remembers the dream and the details very vividly.  He arose and felt a sense of happiness like he has not felt in a long time, he said.  He had been sick the last few days, and realized although he was not completely well, he felt much better, and was no longer worried about the effects of his illness during our upcoming flight, which had been worrying him considerably.  He stayed up for a while praying the Jesus prayer.

We are flying on Air France right now.  It has a completely different feel, different ambience.  The Flight attendants seem much warmer, which I did not expect.  And I love their French accents!  On each seat is a little packet with a lightweight blanket, a pillow, a headset and eye shields.  We had fun settling in and 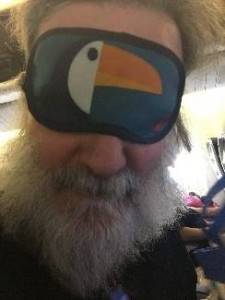 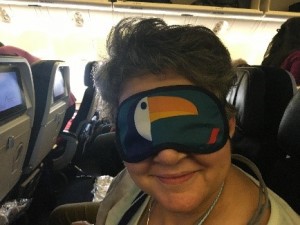 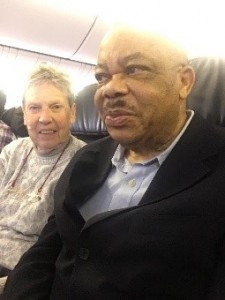 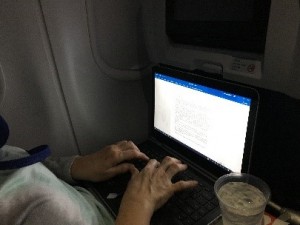 meeting our neighbors.  The gentleman next to me is Nigerian and is named Marchan, which means “You do not know what tomorrow will bring.”  He and his wife live in Dallas and own a home health care company. 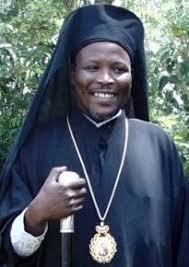 There is – was – an African bishop by the name of Athansios who travelled recently to America to attend his sister’s wedding.  Apparently shortly before leaving he was diagnosed with an aggressive cancer.  He arrived in America, felt very poorly, and ended up missing the wedding entirely.  He had to be admitted to the hospital, where very he quickly fell into a coma.  After a few weeks, Bp. Athanasios died, much to the dismay of his flock in Kenya, for they greatly loved him.  The Orthodox church in Kenya is administered by the Greek Orthodox Church, and most of their bishops are Greek; Bp. Athanasios was an African man, and the Africans were very proud of him.  His death was a couple of weeks ago, and apparently his body will only be arriving in Kenya this Wednesday.  It is quite possible that we will be able to attend his funeral.  I have never been to the funeral of a bishop.  I expect the services will be done in Greek, but possibly in their local language – Kikuyu?  Swahili?  I am excited to go, because he is considered by many to have been saintly.  I am eager to see their vestments and hear their music and see how their African roots blend with Orthodox tradition.  May God have mercy on his soul.

And now we are in Paris at Charles de Gaulle airport.  It is very foggy outside, about 31 degrees.

Everything is very clean and tidy and quiet.  There are shops, but not restaurants.    Kailyn was hoping we could take some pictures of Paris for her, but unfortunately we are just here at the airport, looking out at blinking red lights in a sea of fog. 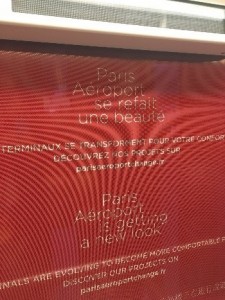 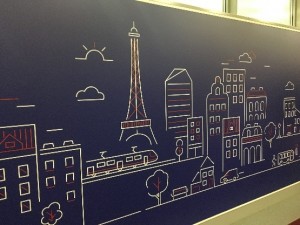 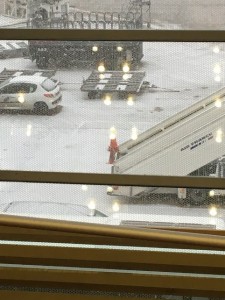 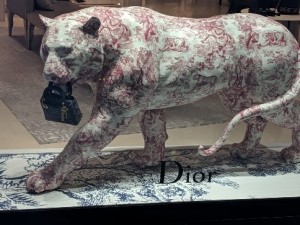 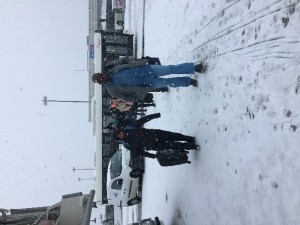 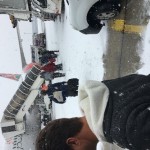 It is hard to tell but this is what a       We took a 25 minute bus ride to where the plane was waiting, then

plane.  It was COLD and WINDY, and we were dressed for Kenya. 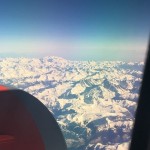 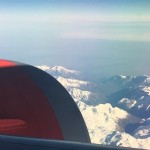 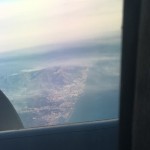 We flew over a huge range of snow-covered mountains.  And then they abruptly ended.  Further south we saw a shoreline with a small village.

I don’t know if the mountain range was the Swiss Alps or not.  This plane does not have a map of our progress on the seat monitors like the other planes had.  It also does not have wi-fi available, or an outlet to charge up my computer, so I’ll be ending shortly.  I am worried that my family is worried.  I did not want to send a message that we had arrived in Paris because it was perhaps 1:30 in the morning, and I didn’t want to wake them.  We boarded around 11 am local time, I think 4 am Dallas time.  Then we sat on the plane for 1 hour and 35 minutes while they cleared the runway of snow and ice, and de-iced the plane.  And as I said, there was no wi-fi available on the plane to update you all.  We will be landing in Nairobi around 1:30 am local time, 4:30 Dallas time.  A 9 hour fight! But the plane is only half full, and they allowed us to switch seats, so we are sitting in a row ourselves with an empty seat between us.

Reach Matushka Marina at mmmarinaholland@yahoo.com. She is the wife of Priest Seraphim Holland, and their parish is St Nicholas Orthodox Church, McKinney Texas http://www.orthodox.net